Usually, when a business is said to be underwater, it’s not a good thing. In the intertwined duck hunting and rice growing industries of Arkansas, however, it’s all about the water. Every single drop. 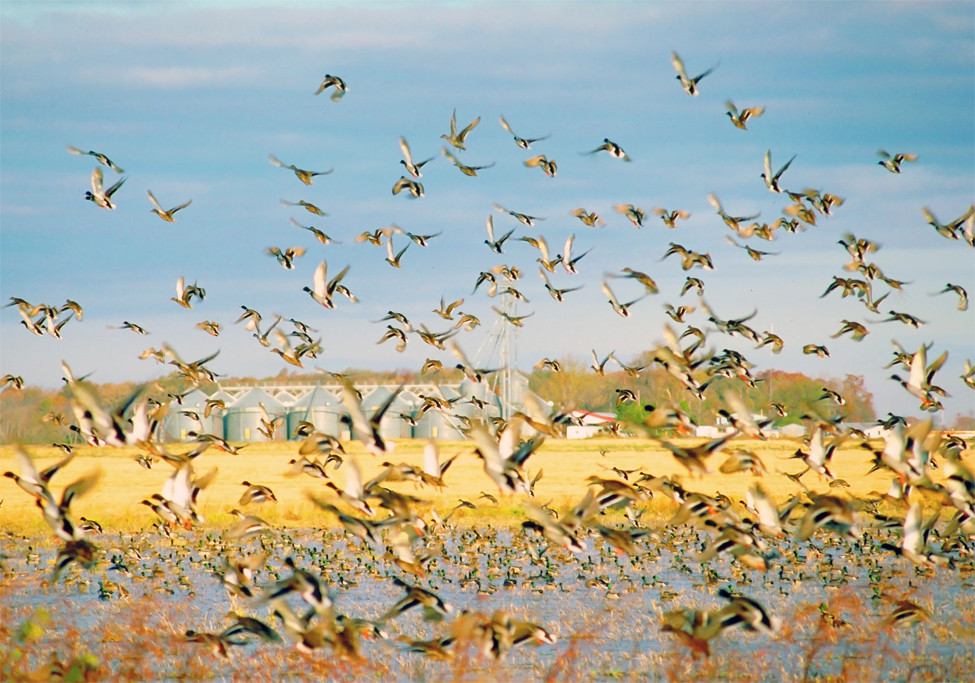 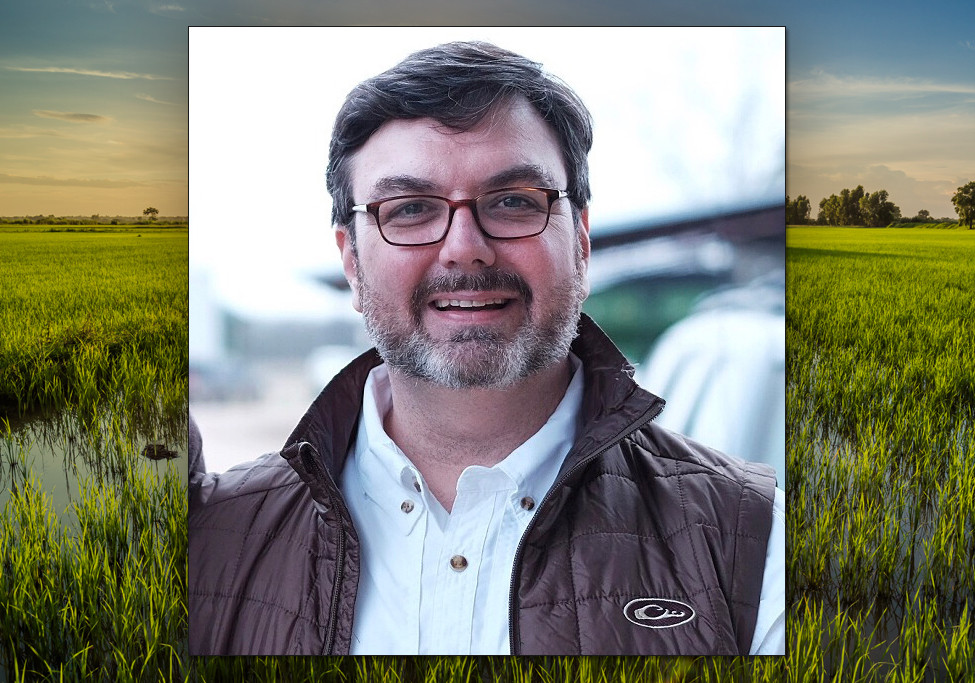 Usually, when a business is said to be underwater, it’s not a good thing.

In the intertwined duck hunting and rice growing industries of Arkansas, however, it’s all about the water. Every single drop.

Arkansas makes up 50 percent of the United States’ rice production, contributing close to $1.3 million and 200,000 jobs annually, with a $6 billion impact on the state’s economy. In 2016, U.S. rice exports totalled $1.9 billion and provided 10.4 percent of the world’s total rice exports, placing it behind only India and Thailand.

One in six jobs in the state are in agriculture and rice is Arkansas’ biggest row crop.

“No one else comes close,” said Ben Noble, recently named vice president of marketing and strategy for Riceland Foods.

Yet, as producers of the state’s biggest agricultural commodity, the rice farmers of Arkansas are nonetheless facing challenges, despite producing a staple food for half the world’s population.

Chief among farmers’ concerns are flat commodity prices, input costs and water — its quality, expense, how much there is and how much there will be in the long run.

Droughts in some rice producing states and overuse or waste of water in others, like Arkansas, has rice growers looking for cost effective water management methods.

And if action isn’t taken, it could be a dry forecast for the future.

“We’re using more water right now as a state and a commodity,” Noble said, adding that if changes aren’t made, parts of the state could run dry in 30 years.

“That’s going to impact the state economy, the farm economy and then it will impact the ducks,” Noble said.

Come and Get It
Long before the first grain of rice was harvested in the state, Arkansas was a mecca for migrating ducks stopping to feed in flooded, hardwood timbers on the way to their winter homes.

The explosion of the rice industry in the early 1900s created acres and acres of wetlands on Arkansas’ Grand Prairie, tying ducks and rice together in a mutually beneficial relationship.

Stuttgart, the “Rice and Duck Capital of the World” is located in the narrowest stretch of the Mississippi Flyway, the migratory route over which more than 325 bird species travel each year from Canada and the northern United States to their winter homes at the Gulf of Mexico and in Central and South America.

First grown by colonists in the freshwater marshes of South Carolina and Georgia, rice was a demanding crop. It took several hundred laborers to man small operations and the soggy soil was a challenge to the agricultural machinery of the day.

Nevertheless, rice thrived and was a major commodity by the time of the American Revolution. The crop spread west after the Civil War and found a home in Arkansas, Texas, Louisiana and Mississippi, which, along with California and Missouri, are the top rice-producing states today.

More than 100 years ago, Arkansas’ first commercial rice crop was planted on the Grand Prairie, an area that had already become known for waterfowl hunting. Historical accounts settle on 1904 and attribute the first farm to W.H. Fuller and his brother-in-law John Morris and Morris’ wife Emma.

Before a human first laid eyes on the oceans of tall, waving prairie grasses in what came to be the Stuttgart area, ducks were stopping off to feast on the acorns and other foodstuffs produced by the trees and found in the flooded hardwood timbers.

Then came rice, and the farmers might as well have rung a dinner bell. Ducks, already accustomed to a winter banquet in Arkansas, descended on the fields to scarf up the rice that, in the days before harvesting machines, was collected in shocks.

Mechanical harvests have long since replaced the hand labor, and modern technology — pumping systems, levees and precision leveling of the fields — has given farmers greater control over the amount of water used and retained.

So much so that they can willingly flood more than 70,000 acres of rice fields in the winter months, giving ducks precious, shallow waters in which to rest and feed on nutritious waste grain, weed seeds and aquatic invertebrates. With their eating habits the dabbling ducks and other waterfowl clean up the refuse in the fields, improving their quality.

While it means the expense of using more water, the artificial wetlands also provide a welcome source of supplemental income for the farmers who lease their fields to duck hunters and outdoorsmen who drop an estimated $100 million into the local economy.

Josh Hankins, rice stewardship partnership coordinator for global advocate USA Rice, said waterfowl hunting — in which 82 percent of the hunters come from urban areas, according to a 2011 study — helps bridge the nation’s growing, urban-rural divide. But it also provides an economic shot in the arm for rice farmers who are part of a national agriculture industry that, Hankins said, has seen farm incomes drop close to 60 percent over the past four years.

“Agriculture goes away, so does the outdoor recreational economy,” Hankins said.

The rice-duck relationship thrives on water, but despite the warnings farmers and hunters, who are often one and the same, needn’t panic over apocalyptic visions of dry fields and hunting holes. There is plenty of time for action.

And action is being taken.

Liquid Assets
Farmers have been called on in the past for input and participation in various conservation efforts. The Wetlands Reserve Program, for example, offers incentives for farmers to take land out of production and it put back into the environment.

One of the most recent and potentially effective initiatives is the Regional Conservation Partnership Program (RCPP). A creation of the 2014 Farm Bill, the locally driven RCPP takes money from the Farm Bill’s conservation budget and uses it to build partnerships and raise non-federal, matching funds.

Organizations can compete for the $250-$300 million available each year in RCPP programs nationwide. In a teamup that reflects the rice farming-duck hunting connection, USA Rice and Ducks Unlimited joined forces to secure funds and focus on water conservation.

“USA Rice and Ducks Unlimited got together and said ‘You know what? We’re a great fit for this program,’ ” Hankins said.

The first program, in 2015, was the $10 million Sustaining the Future of Rice, which helped rice producers implement conservation practices. Late last year it was announced the USA Rice-Ducks Unlimited partnership had been awarded $7 million for the Mid-South Graduated Water Stewardship Program to be used for rice-specific contracts in Arkansas, Mississippi, Missouri and central and northeast Louisiana.

Rice farming and agriculture in general have come a long way since the early Arkansas rice farmers tied their shocks by hand. High tech and specialized planting and harvesting methods have helped make the farmers less dependent on fickle weather.

Today rice farmers have pump and levee systems that can create uniform and controlled flooding and draining. Rice thrives in water-retaining, heavy clay soils that would be a poor home for other row crops.

The flooding prevents erosion and topsoil loss and modern irrigation techniques reduce water requirements. Precision leveling helps the rice farms’ block fields both catch rainfall and retain water — creating habitat for migrating ducks — and also to drain more thoroughly so that more water can run back into aquifers and be reused.

“We help take some of the risk out of change,” Hankins said of the USA Rice-Ducks Unlimited partnership. “Once they implement these programs they can see their input savings, so it saves them money on the front end.”

Two of A Kind
Farming anything is tough, but rice, as an aquatic crop, presents its own unique set of challenges different from those faced by the traditional dirt farmer.

“It takes a lot to take it from seed to harvest,” Noble said.

The pumps, levee systems and other technologies used to produce the right amount of quality water cost money, and water also means a whole different ranges of pests and diseases for rice farmers to combat, which also costs money.

“They’re into efficiency,” Noble said of the farmers. “They don’t want to have to put more water out there if they don’t have to.”

The RCPP programs serve the dual purpose of preserving water and helping the famers save money during these lean periods of flat commodity prices or uncertainty in the export market.

“These guys are small business,” Hankins said. “We’ve got approximately 2,500 rice farmers in Arkansas and over 90 percent of those are family owned. Any other small business you have a general idea of what you can sell your end product for. … Rice farmers, at the end of the day, they slide that product across the table say ‘Okay, what are you going to pay me for it?’”

Rice was under $456 per metric ton in June, down from $607 five years ago. The bottom line for rice farmers is further affected by outside factors like legislation, weather and trade deals.

“There is no other small business in America like it,” Hankins said.

Noble said that cross partnerships between agriculture and conservation had been beneficial in the past decade, but the USA Rice-Ducks Unlimited conservation partnership has been “groundbreaking” in bringing the two together for a common good.

“If you like ducks you need to like rice because they go hand in hand,” Noble said.

Associated with global advocate the USA Rice Federation, Arkansas Rice is the voice of the rice farming industry in Arkansas and provides outreach to the state government and congressional delegation, various other political organizations and national commodity groups.