His perfectionist streak when it comes to building duck habitats makes Jody Pagan the last guy who'd confess to any project being beyond the reach of improvement. But to look at him and see the glint in his eye, you know it's crossed his mind with each challenge overcome and each project completed. 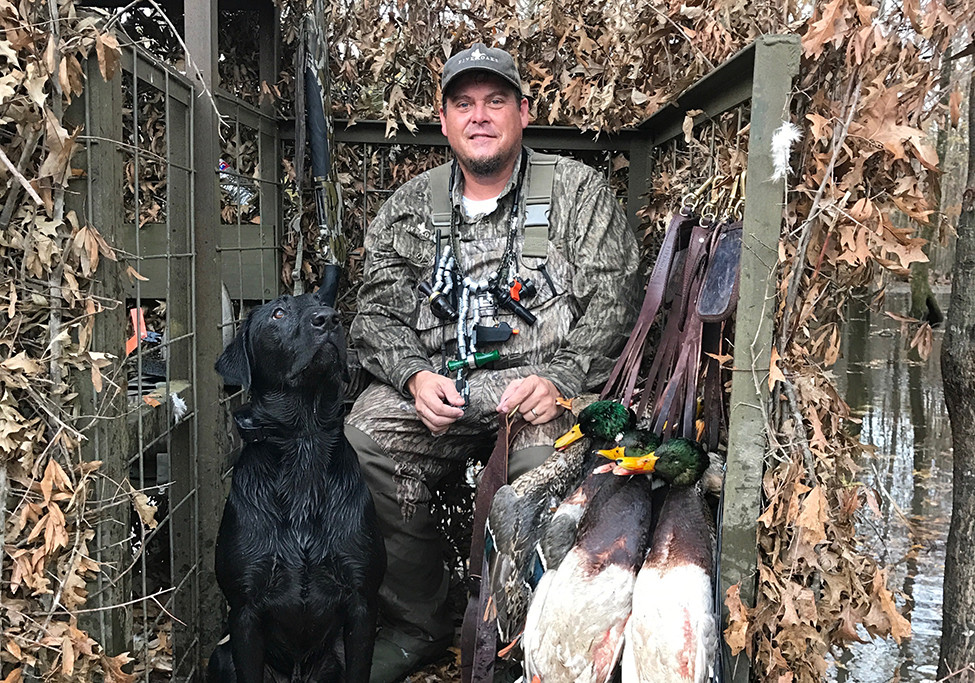 Five Oaks Wildlife Services
Jody Pagan's know-how as a conservationist once led him to an agency job in the nation's capital. But it was at Five Oaks Hunting Club where he learned how to devise a habitat that drew ducks in the kinds of numbers hunters crave.

Jody Pagan leans forward on the lunch table, his brawny arms folded in front of him. He squints.

For the past hour, Pagan, conservationist and duck habitat expert, has been holding court about his career in the business and the stories and details have flowed out of him with ease. But the question before him, the one that hangs in the air like a stray pinfeather, has momentarily put him on pause.

Have you yet to build the perfect project?

After what feels like a long time, Pagan shakes his head, releasing a slow grin that sidles up one side of his face.

Pagan's answer reveals the sheer preposterousness of the suggestion; it’s the ultimate Catch-22.

His perfectionist streak when it comes to building duck habitats makes Pagan the last guy who'd confess to any project being beyond the reach of improvement. But to look at him and see the glint in his eye, you know it's crossed his mind with each challenge overcome and each project completed.

No, he's not there yet, but he's getting a little closer every time.

“When I get to the end of [a project] I say no, it’s not perfect because I always want to do something better,” Pagan said. “I’ve been in every mud hole in the Mississippi Delta. We go in, we grind, we fix the levees, we put new pumps in, we put new gates in. Well, we think that day, ‘Hey, we’re done. It’s perfect.’ There is no perfect.”

Personal Passion
Don't think for a second that Pagan is tortured his Taj Mahal still eludes him despite decades spent honing a reputation as the foremost duck habitat expert and builder. As the old saying goes, "Shoot for the moon; if you miss you'll land among the stars," and as so-called near misses go, Pagan has built and rehabbed some dandies.

Pagan has worked his magic from Argentina to Saskatchewan, Louisiana to Wyoming, the Carolinas to many spots on the famed Arkansas Grand Prairie. He talks about each job like it was kinfolk — the trouble this one gave him, the pride that one instills in him. He knows them intimately, for his is an intimate business; in effect, simultaneously courting Mother Nature and Mother Earth.

"I think it’s just a God-given gift of passion," Pagan said. "I’ve always thought that God puts you in a place to do a task. How cool is it to get to put destroyed stuff back together?

“I would say I have an unruly passion for the work. It would be that simple. I love it.”

Pagan was born to a farm family in the tiny town of Strong, the only child of Joe and Annett Pagan. Growing up in a close-knit family in a close-knit community meant Pagan had ample opportunity to draw the best qualities from the people around him.

From his dad, he took an unflagging work ethic, from his blue-collar uncles an aptitude for building things and, from age 5, a foundational love of duck hunting, also fostered by his dad, that would eventually bring everything together.

Changing Ecosystems
Pagan graduated from the University of Arkansas-Monticello and worked as a biologist for nearly 10 years with the U.S. Department of Agriculture Natural Resources Conservation Service. He ran the Wetlands Reserve Program and worked his way up to Assistant State Conservationist before taking an ill-fated flyer on an agency job in Washington D.C.

“I stayed up there eight months, in and out,” he said, the bile still fresh in his voice. “I was the lowest lifeform in the agency and I’m like, ‘I’ve gotta live in this dungeon besides?’

“But that wasn’t what bothered me more than anything. I’m a very personable kind of guy and I would get on that Metro over there and I would ride down to the South Building and I’d be like ‘Good morning.’ Folks would not look at you, they would not talk to you. And I’m like, man, there’s got to be a better thing to do.”

That thing turned out to be Five Oaks Hunting Club, the legendary outfit in Humphrey, owned by George Dunklin. Dunklin was interested in bringing on someone who would revolutionize the club's ecosystem, something Pagan was more than happy to oblige.

The catch was, this was no academic exercise. Dunklin was in the business of duck hunting and Pagan's new thinking about food sources and water management had to serve a practical end.

“What changed my career — and this is why some biologists can’t get over the hump — is when I went to work for George, we had to kill ducks every day,” Pagan said. “I had to have the science, but he also tasked me with how to figure out how that would let us kill ducks every day. Now I’m not saying kill the limit every day; I’m saying we needed to provide as good an opportunity on the last day as the first day.”

Pagan's strategy of graduated flooding and shorter flooding timetables was not in widespread use, but these tactics, along with broadening food sources, nurturing trees and creating inviolate resting areas had an almost immediate impact. For almost 11 years, Pagan perfected his tactics while keeping one of the most exclusive hunting clubs in Arkansas flush with waterfowl.

“The greatest opportunity George ever gave me was to play with it every day,” he said. “If you’re a biologist and you don’t get to do that every day, what we did at Five Oaks, then all you know is what’s in the books. Well, there are things that will throw you a curve ball and if you’re not adaptive you will die in what we’re doing.”

Two years ago, Pagan launched Ecosystems Protection Service, of which Five Oaks was his first client. Since then, he has traveled over two continents to build and rehab hunting ecosystems.

“I’ve had the opportunity to work on the oldest club in Arkansas. It's in Hempstead County, called Grass Glades. That was incorporated in 1897,” Pagan said. “I’ve worked in Argentina and South America a little bit. They dropped me off on the Corianthus River and I’m sitting there and guess what? Many, many variables are the same: Don’t over hunt. Perfect water depth, perfect smorgasbord buffet of food.”

Legacy Of Knowledge
Despite a stellar record to back up his methods, Pagan says his efforts are wasted when practices aren't kept up after a renovation. He's seen former jobs empty of ducks within a few seasons because the owner didn't follow the formula.

“At this stage of my career, I don't want to burn any more energy on nonproductive projects,” he said. “I mean, we only got so many days on the planet. Let’s be productive. And that’s why I really love doing the public groundwork. I built one last year where the Bayou Meto stretch is, 1,400 acres, 700 acres of waterfowl habitat. Got two more to build this year. Those jobs make a significant difference.”

Pagan has also taken steps to solidify his best work for future generations, by training others to correctly maintain and manage habitats. It's been a difficult process, not for lack of apt pupils, but because it divests him of something he's held close for so long.

“It’s the only thing that I think ever held me back because I’m real possessive about a project,” he said. “But those engineers that I have do my work, I’ll put them against myself or anybody in the world. So instead of me being the only ship, what I’m trying to do is multiply myself with different managers.

“I’m training one guy in Louisiana, I’m training a guy in Kansas. I’m training the guy down at Five Oaks, because what can I really leave? I can leave with a sack of money, but I need to leave with my intellectual knowledge being my legacy.”