Born in the duck hunting capital of Stuttgart, the bank shares a history with the famed World's Championship Duck Calling Contest and Wings Over the Prairie Festival. 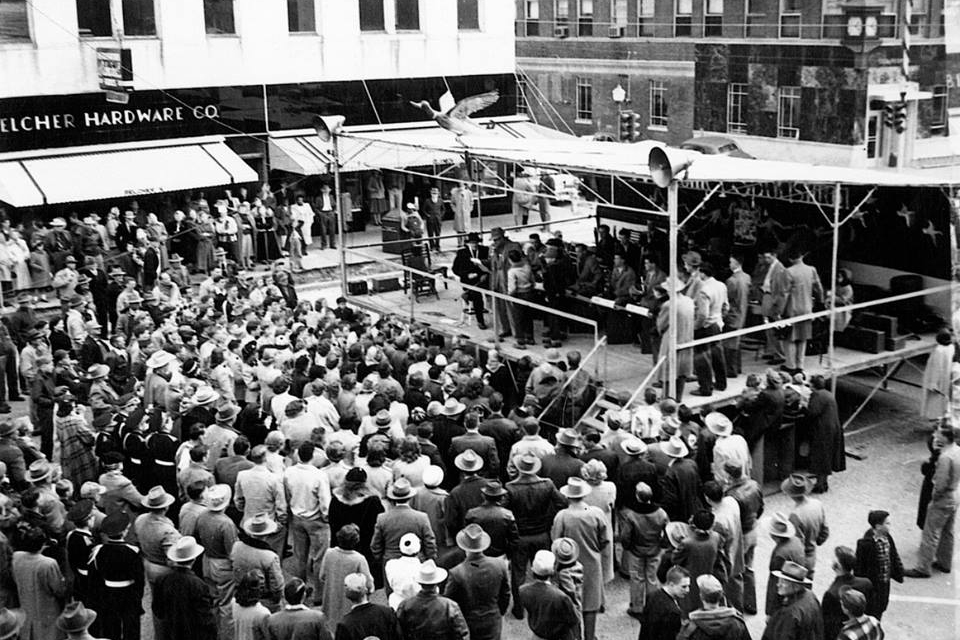 In 1944, Stuttgart was observing the ninth version of its annual Duck Calling Contest, the already popular commemoration of duck hunting in Arkansas that was destined to grow into something bigger.

Perhaps little noticed during the festivities, which called for Main Street to be blocked off, were the renovations underway at a building on the corner of Fourth and Main. Arkansas was in the process of chartering a new bank to be located in the city, and Farmers and Merchants Bank would open its doors a short time after the fall contest, on Jan. 2, 1945.

The duck calling competition would grow into a full celebration of duck season and become the nationally known, World’s Championship Duck Calling Contest and Wings Over the Prairie Festival. The contest now includes regional, age, gender and skill level divisions along with the World Championship, while the festival is rich with pageants, a carnival and midway, shooting contests, exhibits, a 5K, cookoffs, merchandise and more.

Like the contest, Farmers and Merchants Bank has become an Arkansas institution, with branches throughout the state, as it celebrates its 75th anniversary.

Begun with 80 stockholders purchasing the first offering of 750 shares for a total of $75,000 in capital, the bank’s total asset size today is $1.5 billion.

The bank’s purpose was and still is to help working people have the means to fund and manage their farms and businesses and ensure a good future for their families. In short, the bank was founded to help the sort of people who helped make the duck calling contest a fixture and tradition in Stuttgart.

Thomas Walsh, of Greenville, Mississippi, was the first winner, without using a duck caller, and his prize was a hunting jacket presented by the American Legion post.

As the event grew it became known as the National Duck Calling Contest, and by 1950 the program consisted of the Sportsman's Party, concerts and a marching festival featuring high school bands and majorettes from across the region. Shooting exhibitions were also part of the lineup.

Known as the World Championship Duck Calling Contest by the mid 1950s, the event attracted visitors from across the country, including celebrities and dignitaries. A 1957 flyer mentions rail transportation to Stuttgart, an airport suitable for Twin Beech and DC-3 aircraft and Trans-Texas airways providing scheduled airline service for Stuttgart, connecting to Memphis and Dallas.

Like the Wings Over the Prairie Festival and World’s Championship Duck Calling Contest, Farmers and Merchants Bank has grown far beyond that first little location that sprung up on the corner of Fourth and Main 75 years ago.

Farmers and Merchants Bank has expanded to five locations in Stuttgart, as well as locations in DeWitt, Marianna, Hazen, Des Arc, Perryville and Morrilton. Its umbrella includes the Bank of Fayetteville in Fayetteville, West Fork, Prairie Grove and Farmington.