Anybody Hungry? Get Acquainted with Arkansas' Best Diners, Drive-Ins and Duck Dives

Arkansas’ prime duck-hunting territory, the hardwoods and wetlands ranging from the northeast to the Delta, is dotted with dining establishments bursting with great food and boasting colorful character. 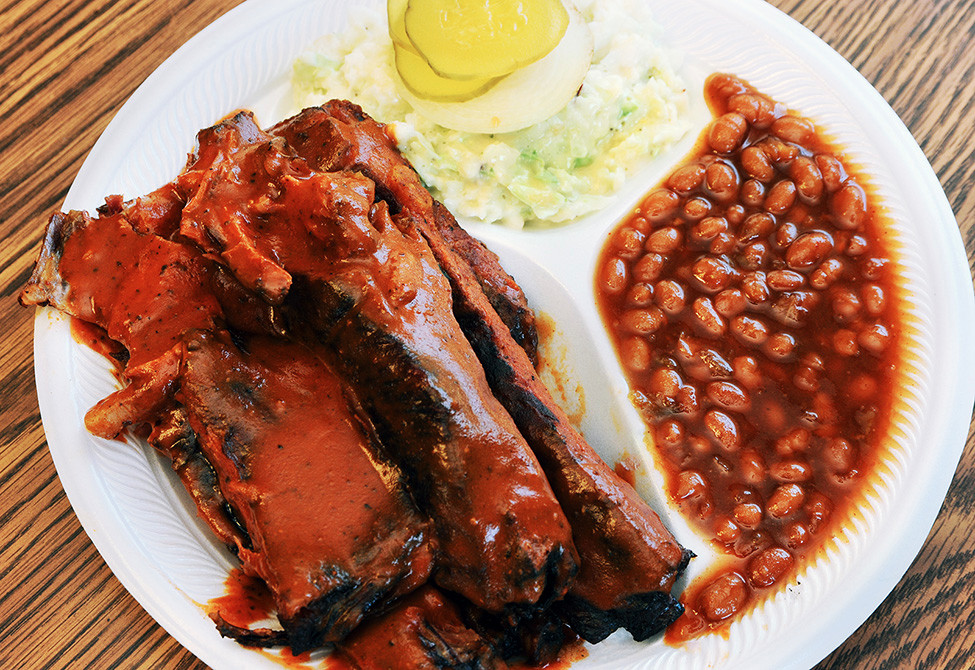 As we’ve seen elsewhere in this issue, the amenities of a well-appointed duck lodge, including buffet breakfasts and sit-down dinners, are hard to beat.

And no one should try.

But for those who may not have the time to enjoy an overnight at one of the state’s top lodges or hunting clubs — the up (way) before dawn commuter shooters — there has to be a place to grab a power breakfast or celebratory lunch or dinner following a successful hunt.

Several places, to be exact.

Arkansas’ prime duck-hunting territory, the hardwoods and wetlands ranging from the northeast to the Delta, is dotted with dining establishments bursting with great food and boasting colorful character.

We’ve attempted a non-scientific roundup of some of the region’s best diners, drive-ins and duck dives.

It’s not as comprehensive as it is a cross section of out-of-the-way eateries representing the best grub that duck country, and Arkansas for that matter, have to offer.

Pull up a chair. If you’re not hungry now, you will be. 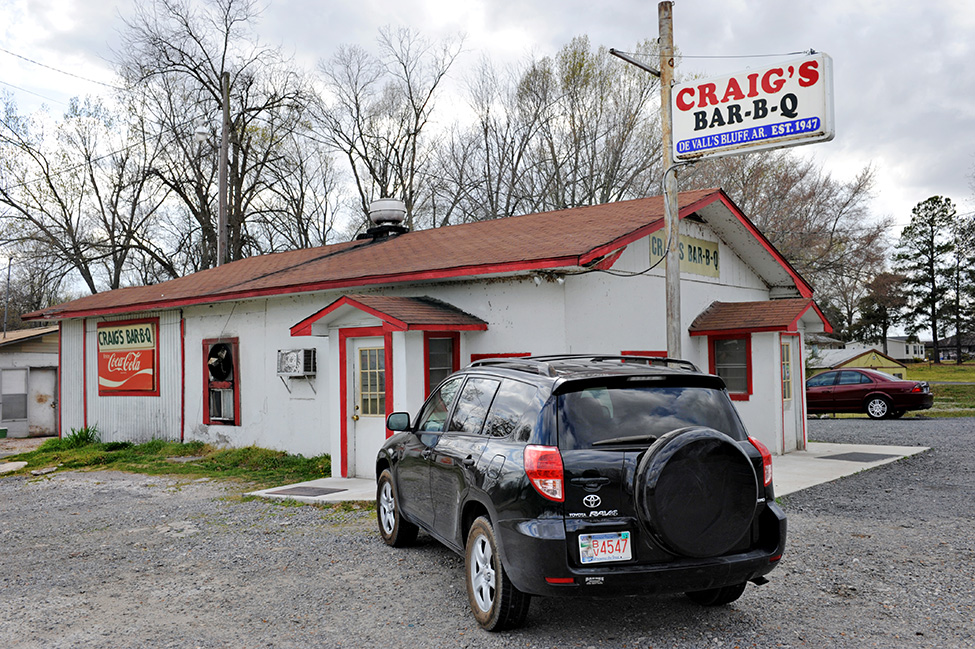 Opened by Wes and Lawrence Craig in 1947, with three generations of the family maintaining the quality, Craig’s is known for the sauce that helped earn it a spot in the most recent class of inductees to the Arkansas Department of Heritage Food Hall of Fame. The sauce is even bottled for sale so discerning, amateur grillmasters can perk up their own concoctions at home. Craig’s sauce recipe is a secret, but it announces itself on the taste buds, dancing with the tender, savory pork and beef whipped up in the crowded kitchen.

Crisp and creamy slaw (made with another secret recipe) and beans add flavor and tradition to any barbecue dish you order. And if, for some ungodly reason, barbecue isn’t your thing, a juicy cheeseburger or a best-kept-secret grilled cheese are menu staples that will satisfy that craving you built waiting out ducks in flooded timber. Just make sure you bring cash.

What you’re having: Pork with medium sauce. Because sauce.

Why it’s good: Hints of vinegar, peppers, something sweet, plus a little heat make the sauce smoothly dash this way and that on your tongue. 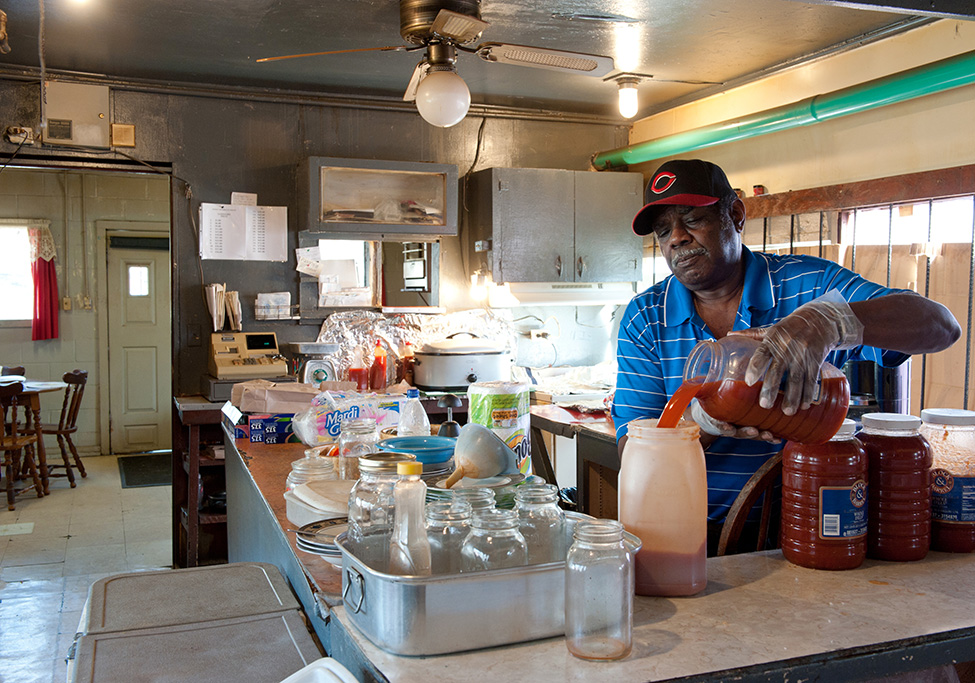 What makes it unique: One of the oldest, if not the oldest, restaurants in Arkansas, as well as one of the oldest owned and operated by African Americans, Jones Bar-B-Q Diner is a member of the Arkansas Department of Heritage Food Hall of Fame and the state’s first recipient of the prestigious James Beard Award. But it stays humble and true to its roots, with a cinder block lined dining room complete with memorabilia, photos and newspaper clippings and a menu that is basically all chopped pork.

Generations of the Jones family have operated an establishment of some sort since the 1910s, but it was in 1964 when Jones moved to its current location and assumed its current name. The rest is Arkansas culinary history.

What you’re having: A chopped pork sandwich

Why it’s good: Tender, flavorful pork, finely chopped, with a vinegar-based red sauce that is slightly sweet and definitely tangy, with a mustard-based slaw between two slices of white bread. 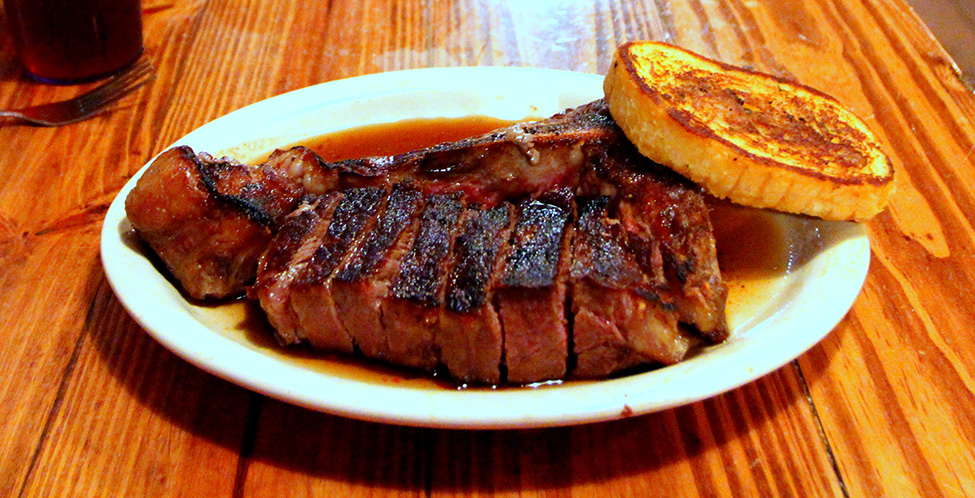 The beef bears witness that it's not all just tamales at the Tamale Factory.

What makes it unique: Is it the weekend-only dinner hours? Is it the horse farm on the premises? Is it the rustic, rural location? It’s all of these, plus the food that earns raves from both visiting duck hunters and local clientele. Owned by George Eldridge — perhaps better known for opening Doe’s Eat Place in Little Rock, another notable tamale haven — the Tamale Factory is located in a barn that has been on property that has been in the family since the 1800s.

The menu features a four-sandwich selection of hamburgers, cheeseburgers, chicken and grilled cheese. Dinners include steaks, shrimp, salmon and catfish. The tamales (with chili) appear only on the appetizer menu, but it is the spicy, hearty little cylinders of savory satisfaction that built the Tamale Factory’s reputation. What better way to warm up after a day hunting the hardwoods? Just remember to make a reservation if your band of hunters is six or more.

What you’re having: The name of the place is a big clue.

Why it’s good: Tamales are prepped beginning at 5 a.m. and served fresh and strategically seasoned. They also are produced by a tamale expert. Eldridge used to buy his Doe’s (Little Rock) tamales from the Doe’s location in Mississippi, then refined his own recipe in a now shuttered tamale factory that was based at Newport.

Photo by Kat Robinson, author of "101 Things to Eat in Arkansas Before You Die". 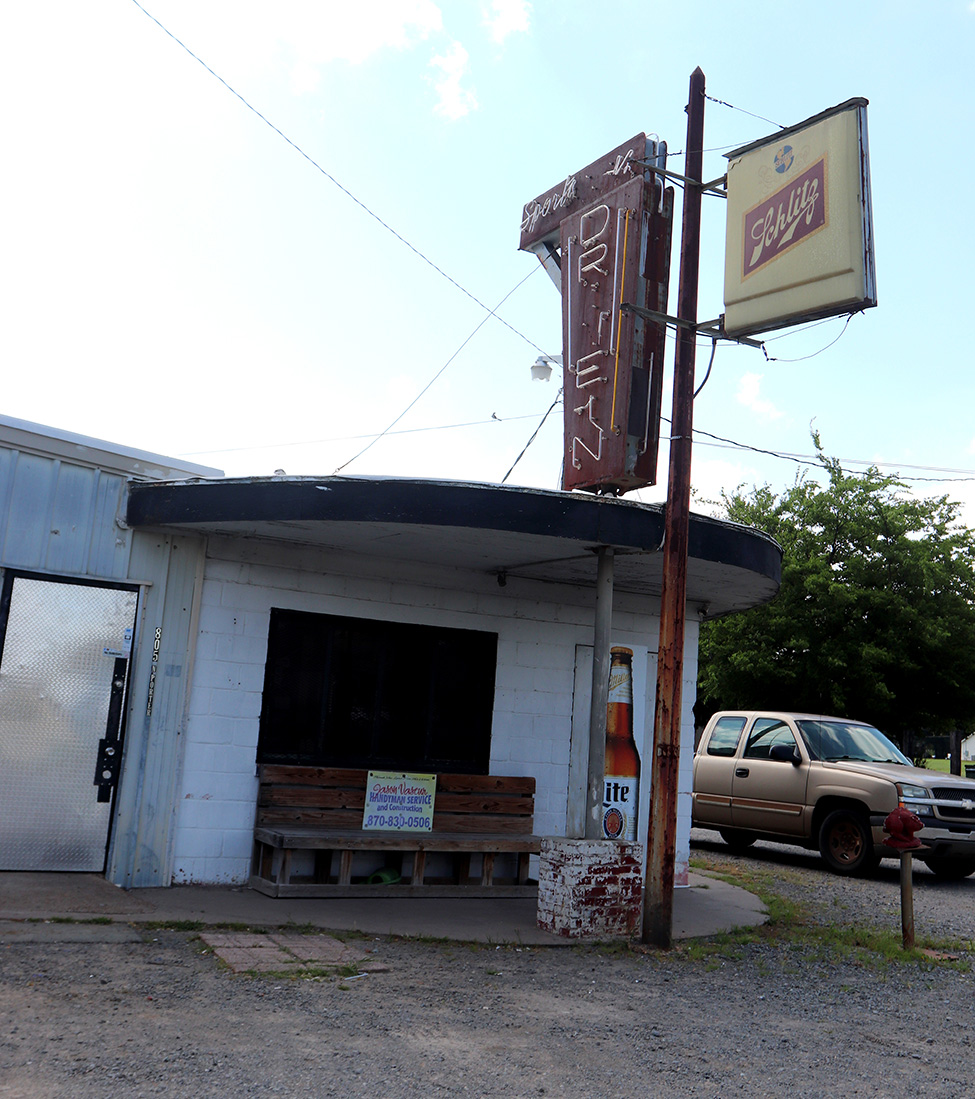 The look is vintage and the food is fab at Sportsman's.

What makes it unique: We had to include an establishment from Arkansas duck hunting’s ground zero and this Stuttgart mainstay satisfies the appetite while embracing its “dive” status. Opened in the 1950s — the Schlitz Beer sign may be vintage — Sportsman’s Drive Inn, we’re pleased to note, hasn’t changed much in the 10 years since we last visited.

Boasting American plate lunches and bar food, Sportsman’s is a drive-in in name only. But when you walk inside you’ll find an interior that more or less complements the exterior and a lineup of menu items ranging from Philly cheesesteak and chicken-fried steak to frog legs and pork chops.

When it comes to sides the gang’s all here: rice, potatoes and gravy, fried okra, mac and cheese, veggies and more, plus cornbread, rolls and a wealth of desserts including but not limited to chocolate cake and coconut cream pie. But the juicy, stacked burger with fries wins the word-of-mouth war — first in the hearts and appetites of waterfowlers visiting the “Duck Hunting Capital of the World.”

What you’re having: One more time, cheeseburger and fries.

Why it’s good: The patty is around 11 ounces uncooked and the fries are natural cut, with the potato skins left on. But let’s let a Yelp review do the heavy lifting here: “Driving from Dallas to Stuttgart my little guy (10 years old) will hold out for hours for a Sportsman's burger. When I asked if he wanted to go duck hunting … he said ‘For sure I want to go duck hunting, but Dad we have to stop and get one of those yummy cheeseburgers.” Out of, and into, the mouths of babes. 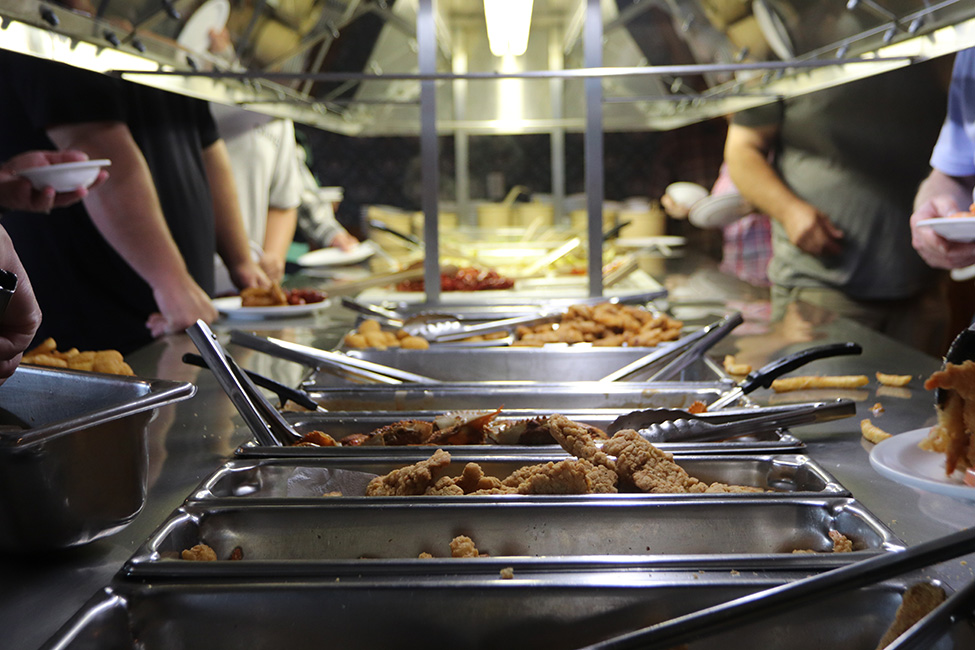 Dondie's in Des Arc puts out a regularly refreshed, muscular buffet in a riverboat setting.

Menu/cuisine: If “a little bit of everything” is your favorite dish, Dondie’s has the buffet for you, offering a mix of seafood dishes, steak and chicken, with catfish playing a big role. If you’d rather order dinner, the steak-and-seafood menu offers selections ranging from crab legs to ribeye.

What makes it unique: This haven for hungry hunters was built in the 1980s and takes up two stories of a faux riverboat structure situated next to the White River. Dondie’s needs the space for the customers who line up to get in as well as for the 20-foot, double-sided buffet groaning with chicken tenders, boiled shrimp, crawfish, barbecue ribs and a slew of sides and desserts. The buffet is refreshed every 3-5 minutes, so items are fresh and hot.

A nearby park with a boat ramp, plus Dondie’s riverboat look, reflect Des Arc’s status as one of Arkansas’ earliest settlements and an important shipping point. Diners can enjoy a view of the White River and its arched bridge span, when not focused on creating more space on the plate.

What you’re having: Catfish

Why it’s good: Crispy and seasoned, cornmeal-breaded catfish, steam rising from the tender, flaky center, in a riverboat setting next to a river? Does this require further explanation? 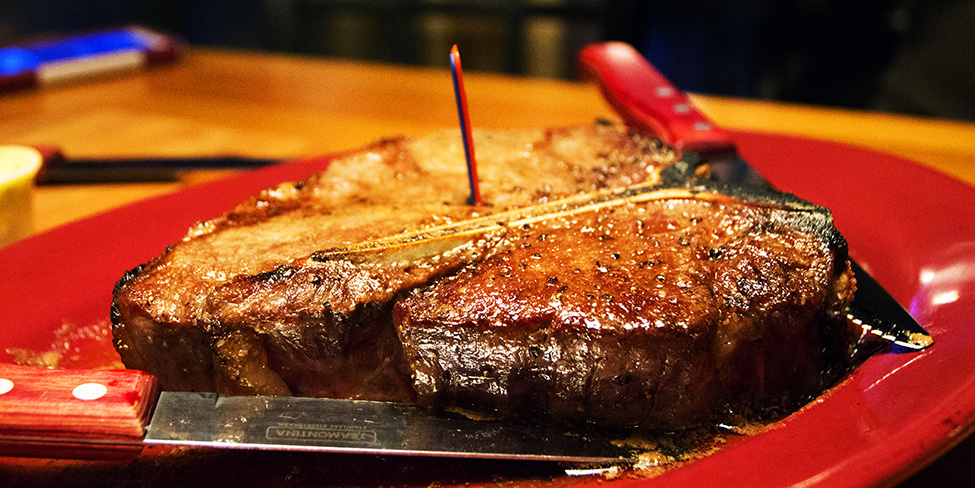 Taylor's offers an upscale steak in the heart of duck country.

What makes it unique: Aged beef just like you would get at a high-dollar steakhouse in a big city. But you're in a tin-walled, old country store next to a soybean field. Whether you’ve bagged your limit of ducks or come up empty-handed, you’ve been up before dawn, given it your best shot and you deserve a fine dining experience.

Taylor’s is in its fourth location, past the Dumas outskirts. As it has relocated it has morphed from a grocery counter into one of the state’s best steakhouses since the family went into business with Taylor’s Grocery in 1954. Obviously it’s the meat that matters but Taylor’s also has some notable bread puddings to satisfy your sweet tooth. Hunters are in good hands with owner and steak expert, Chuck Taylor. As he worked toward becoming a restaurateur he held a number of jobs, including duck lodge cook and rice levee surveyor.

What you're having: Bone-in ribeye

Why it's good: Since 2012, owners Taylor and his wife, Pam, have been living their dream of providing a distinctive dining experience so good it would lure people from city limits to a rural spot somewhere between Dumas and Monticello. Taylor developed his dry aging process over several years, including time spent cooking at Yellow Dog Duck Lodge during the fall.

Diners at the right tables can observe the meat aging seductively in its controlled coolers near the kitchen. It’s a process that can take up to 80 days but it’s worth it, as the dry aging concentrates the flavor, leading to unparalleled tenderness and juiciness. Your steak would probably melt in your mouth if you weren’t eating so fast.

Here are a few other, can’t-miss diners and duck dives as named by our duck-hunting executives: 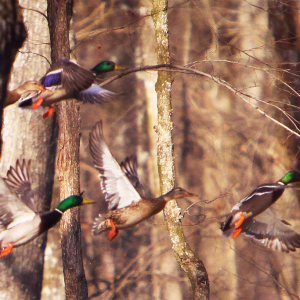 A Weekend of Waterfowling at Greenbriar ... 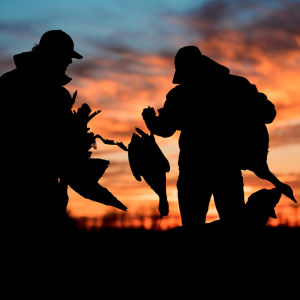 Taking Your Best Shot: Tips From a Pro t...
Permalink