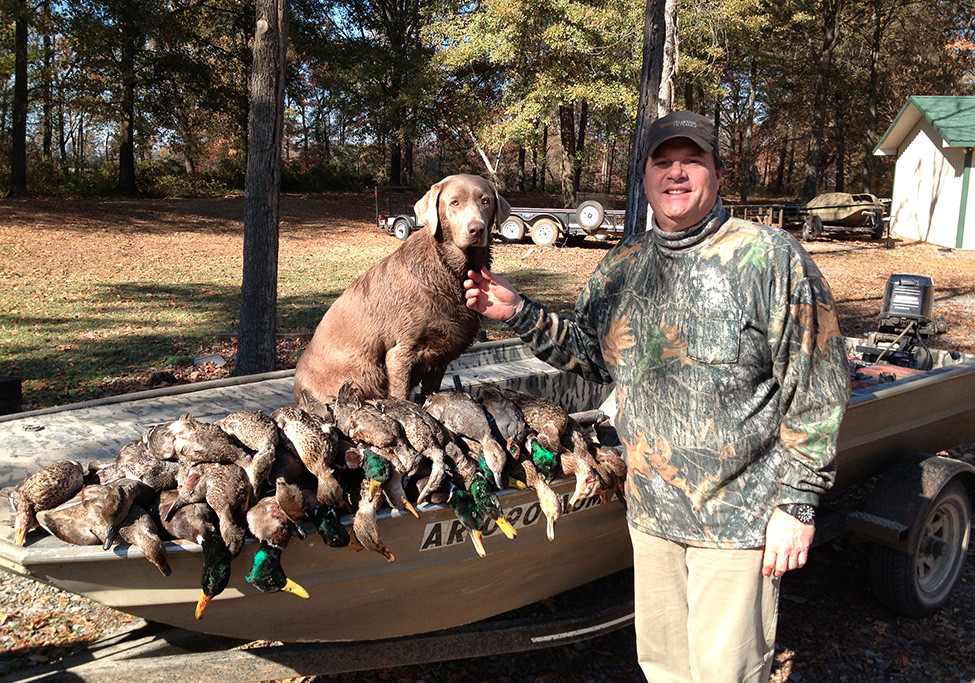 Number of days you hunt a season?
Twenty-five, on average

Where do you hunt?
McCrory area in Woodruff County near the Cache River

What kind of gun do you use?
Benelli Super Black Eagle 2

Rainy, nasty or bluebird sky?
Bluebird is best for our place.

Favorite hunting story/memory?
There are too many to name, but one of the most special hunts was the last hunt with my grandfather. He hunted with a Model 12 and killed three ducks in the air on the last shot he ever made. Ducks landed to his right and he barely saw them. As the one he saw got up, he shot. He did not know there were others that got up and the trajectory of the shot dropped three in a row. It was an awesome memory.

I hunted with Chuck Kelly over a 10-year span in the 1990s in Stuttgart. Chuck was with Entergy at the time and was retiring from the corporate office in New Orleans. On the last day of duck season in 2000, we were hunting together in the snow and each needed one duck. We both had ducks working and I shot one. I turned to him and said “You need to get your last one” as he turned to me to say the same thing. We both shot at the same time, each killed a drake and neither knew the other shot.

What got you into hunting?
My dad starting hunting with my grandfather (his father-in-law). I begged them to let me go and have been addicted ever since then. Will be close to 50 years this fall. From there it was time spent with Dad growing up that evolved to hunting with my son and later introducing my son-in-law to duck hunting.

What is your most unusual “must have” in the duck blind?
Peanut butter crackers for my dog, Zeva.

If you have children do you take them duck hunting? If so what are some of the highlights from these youth hunts?
Yes, my son started hunting with me at age 10 (now 22). Best memories are his first duck and then his first mallard drake (which is on the wall). He had a 20-gauge youth model and on opening day when he was 12 he asked to shoot my gun. I finished the day with his 20 gauge and never got my 12-gauge Benelli back after that hunt.

Which Arkansas executive calls ducks the best?
Currently, probably Gar Lile. Back in the day when he was hunting, Chuck Kelly was a great caller.