Gazing Into the (Social) Distance

Surprisingly, this isn’t the first time a wild-running virus has engulfed the country at the outset of duck season, but anyone under 50 won’t have any recollection of that. 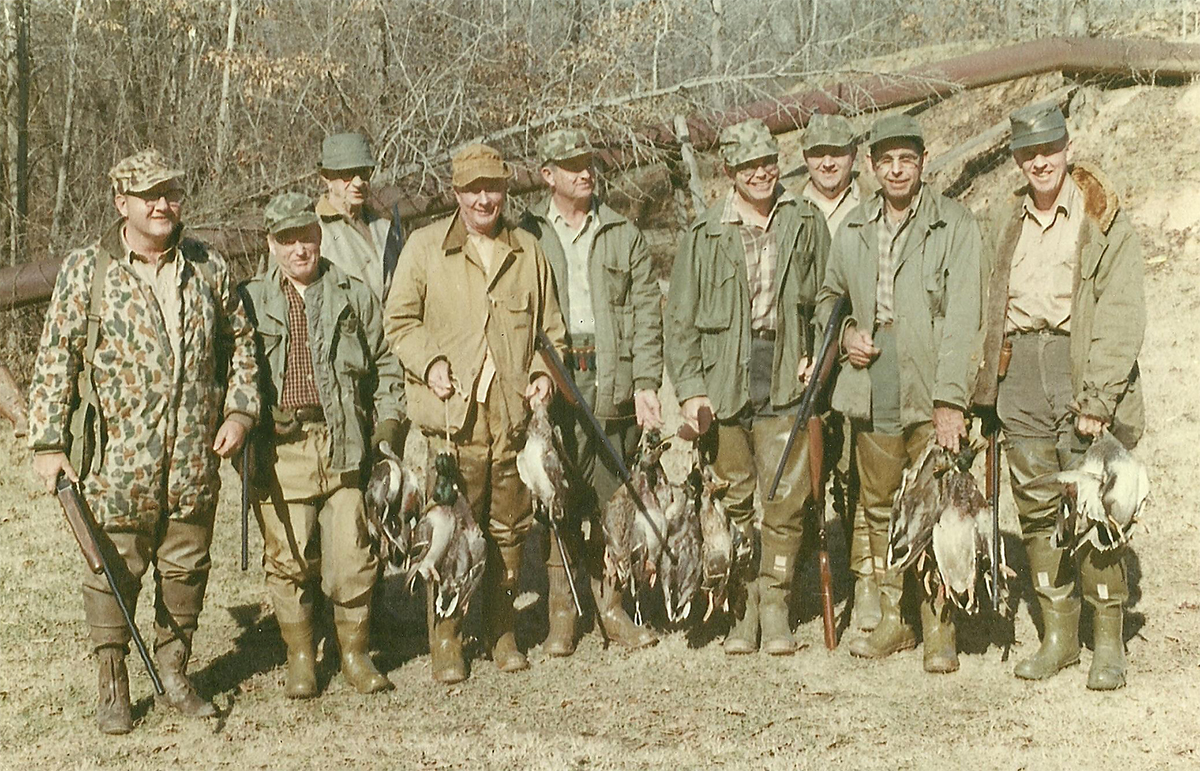 Hunters at Little Siberia, less than concerned about the 1969 flu outbreak.

As unpredictable as duck hunting can be, one thing looks to be certain as we hurtle towards the 2020-21 season.

By the look of things, we will be waterfowling under the cloud of a pandemic that, as we go to press, doesn’t seem to be letting its foot off the gas. Surprisingly, this isn’t the first time a wild-running virus has engulfed the country at the outset of duck season, but anyone under 50 won’t have any recollection of that.

In 1969, the H3N2 Virus outbreak peaked in March and a second wave hit in November. Right in time for duck season. The 1969 flu strain was a highly contagious virus that killed more than 100,000 Americans, yet the country treated the pandemic in a totally different manner.

Keep in mind Woodstock was held in the summer of 1969. Given there was no social media at the time and not nearly the volume of media outlets, I doubt many, if any, duck hunters took any measures to guard against the virus at duck camp or afield.

Fast forward 51 years and the landscape looks very different from those days. Despite the belief held by some that the pandemic will disappear after the presidential election in early November, it is clear by the shape of things at press time we will still be wrestling with this thing.

As of this writing, the Canadian border is closed to traffic going in and out. Canada won’t even let the Toronto Blue Jays travel back and forth to play their abbreviated Major League Baseball season. They’ve landed at a minor league ballpark in Buffalo, New York, to prevent players from bringing back the virus from the United States.

With the borders closed, the increasingly popular practice of Americans hustling to Canada in September and October to hunt the early migrators is kaput. Outfitters are cancelling hunts and issuing refunds to those that had already made their bookings.

What does that mean for us in Arkansas? Hard to say for sure, but one would think more young, inexperienced, huntable ducks could make their way to Arkansas, given that they won’t be wiped out by shooters using spinning wing decoys (SWDs) on the Canadian plains.

Notice I didn’t say “hunters.” I’ve been to Saskatchewan and it’s shooting, not hunting. Duck calls aren’t necessary but a good supply of batteries is paramount. I truly wish something could be done about the SWDs’ negative impact on young waterfowl, but that is a story for another day.

Maybe the lack of guns in Canada this fall has some long-term implications. The sheer volume of ducks harvested in Canada isn’t alarming, but it’s more about who is in the pile. As noted in this issue of Greenhead, Super Hens aren’t wiped out during the Canada season as they aren’t as reckless as new ducks. But future egg producers are hammered pretty good before they ever get a chance to breed, as molting drakes and hens are hard to differentiate in the early fall seasons. And to be frank, they are just dumb.

To get the waterfowl population on the uphill climb, more young ducks need to survive a season, and maybe a light Canada harvest lets more of them see the breeding grounds again next spring.

Here at home, we as hunters will have to juggle a new set of considerations tied to COVID-19. Duck blinds can be pretty cramped environments with nearly no opportunity to be 6 feet apart. Outfitters and duck camps that typically host lots of guests will likely have to rethink their handling of typical hunting parties.

There are some Arkansas guide services considering taking the year off to prevent messing with any outbreaks and repercussions. If so, that will sting for those businesses and the local economies. How will Mack’s Prairie Wings handle the big Saturday crowds at the store? How about all the small, hole-in-the-wall restaurants where hunters love to dine?

Do we wear masks in the blind or around the campfire during social time? My guess is facemasks, other than hiding a bright, shiny face from incoming waterfowl, will rarely be seen. Blowing a duck call through a mask does not produce a very ducky sound.

The 2020-21 duck season is shaping up to have a weird vibe. Duck hunters have plenty of worries without a pandemic. But just like everything else we lose sleep over when it comes to ducks, you control what you can control with COVID-19.

Hopefully the pandemic eases by the time ducks start showing up, but hope is rarely a good plan.