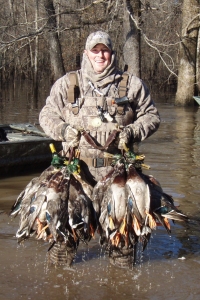 Kris started hunting with his father Dennis at the age of four on their farm. The Adkins had been leasing the land from Bud Carter, a local farmer, but in 1993, they purchased the property and named it Feather Farms. Kris is passionate about waterfowling and calls it his "obsession." "I live to duck hunt," he says.

Kris hunts anywhere from 50-55 days a year. He hunts across Arkansas with friends, but for the most part, hunts his farm on 300 acres north of Hilldebrands Reservoir on Highway 165 between Humnoke and Stuttgart. It is privately owned by his father, Dennis Adkins. The property is all flooded fields and includes a 20 acre trophy bass lake. Kris believes there is nothing better in the world than getting ready for duck season -- rushing blinds and pits, getting all the decoys cleaned and ready, tuning the calls, cleaning the gun. After that, Kris takes comfort in watching all the hard work put in every year pay off. 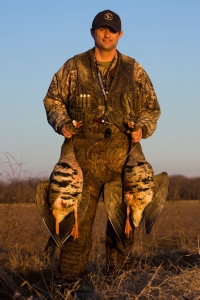 Brent started tagging along with his dad around age 7 to some minnow ponds outside of Keo, and then moving on to Crockett's Bluff in the White River bottoms. Highly fortunate to spend the last 30 years hunting Hildebrand's farm at Gee Ridge, Brent enjoys world class Arkansas field hunting with his dad Bob, two sons Reid and Fuller, and good friends Benson Cashion and Rick Griffin. In the past last few years, he has taken a particular interest in hunting specklebelly geese which has provided a good alternative when the ducks don't want to participate.

Brent's greatest memory to date was when his oldest son dropped his first mallard drake at age 7 with the single shot .410. He's looking forward to son #2 getting his first one this upcoming season. To quote Brent, "Passing along the knowledge and sharing the experiences is what it is all about". 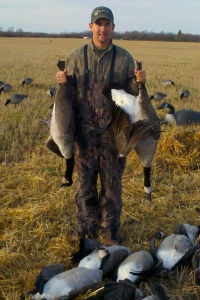 Anthony's dad and grandpa introduced him to duck hunting whe he was 5 years old, and he has been hooked ever since. He usually hunts around 50 days a year chasing ducks in the green timber of the Cache and White River bottoms.Per Anthony, hunting mallards in the Arkansas flooded timber is an unbelievable experience for any outdoorsman.  Anthony's family duck club  was featured in the Arkansas Duck Hunter's Almanac.  The sport of duck hunting allows him to spend time with family and friends in the wealth of opportunties provided by Arkansas outdoors. 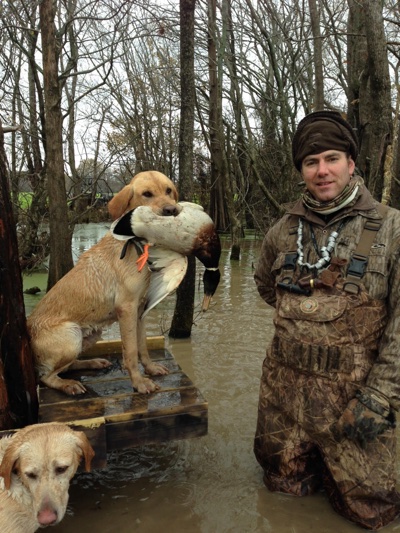 Basically duck hunting was in Greg's blood at birth. He was fortunate to grow up with a private hunting farm/lodge in north Missouri know as "The Bottoms". Here, and at a very early age, Greg had learned pretty much everything about ducks, geese and hunting them that a fellow could know. He has been hunting in Arkansas since 1996, private and public.  Greg is in a club known as Duckhead in Casscoe is looking forward to extending the tradition to his 8 year old son Jake. 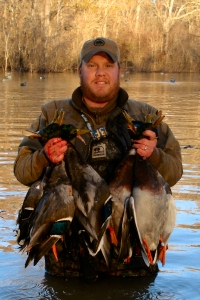 Private ground near Des Arc and the Grand Prairie from public waters of the Cache and White River to the Big Ditch.
Duck Call: RNT Bois d'Arc Old Style
Retriever: Sadie
Favorite duck hunting weather: Clear and Cold in the 30's with a light breeze preferably during a New Moon phase

Matthew grew up hunting ducks and quail with his father and grew up exposed to some of the finest duck hunting in the state of Arkansas. He feels very blessed to have gotten to go on hunts with his Dad as early as 5 and killed his first duck when he was 6 at Lost Island just outside of Stuttgart. The big greenhead still hangs in his Dad's office at home to this day. The Finleys hunted Lost Island and Circle S during Matthew's younger days. Hunting and fishing down on Mill Bayou with his Dad were some of his best memories as a kid. Hunting the big old cypress blinds on Jacobs Lake and Little Pecan will always stick in his mind. Matthew feels very fortunate to have the exposure as a youth to some of Arkansas' most storied hunting grounds. He admittedly did not know until late high school or maybe even college everyone did not kill a "limit" each time they went to the blind. Per Matthew, "Truly blessed is the only way to describe it".

Rick starting ducking with his dad in Mississippi County, what is now Big Lake Refuge. Near Blytheville. At age 5, Hampton's dad carried him and his BB gun to his blind in the big timber. He remembers many morning running out of BBs shooting ducks in the blind. As years went by, Rick started guiding a group of doctors from Memphis most every weekend, $50 and 5 boxes of shells to call for the fee. He was 12 years old. Duck hunting is the driving force in Hampton's life. Rick has owned and operated Two Rivers Duck Club. Two Rivers is a membership club located along the banks of the famous Cache River where Rick works along side his sons Grant, Seth and Shane. 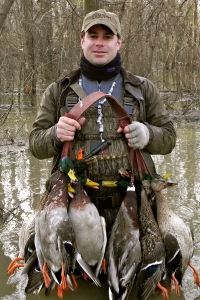 Scott Perry has been an avid duck hunter for 35 years and has hunted from one end of the Arkansas Delta to the other. He co-founded the outdoor clothing companies McAlister® and Mountain Khakis®. He also founded FieldSport Properties, which operated two green-timber duck hunting clubs, a collegiate chapter of Ducks Unlimited, and the public awareness campaign Conserve Game - Hunt With A Trained Retriever. He is a staunch conservationist and considers himself a duck hunting purest inspired by sportsmen such as: Nash Buckingham and Edgar Queeny. 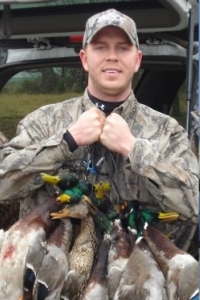 Jimbo was born in Pine Bluff and has been hunting ducks since he was 5. Jimbo killed his first duck that year and hasn't quit since. He is lucky enough to have a couple of private clubs in which his family holds memberships, but Jimbo spends a bunch of days on public ground as well. He will pretty much go where the ducks are. He averages over 40 days in the woods or in the fields every season. He enjoys hunting ducks more than anything. Jimbo loves chasing turkeys in the spring and spends some time on the deer stand, but there is nothing better than standing in ankle-deep water with his buddies and family on a winter day. He enjoys the social aspect of duck hunting and the challenge of doing it right. Jimbo is opposed to the spinning wing decoys and thinks that hunters can do anything they need with a jerk string and a duck call -- just find where they want to be! 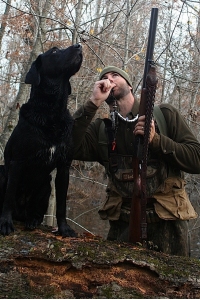 Joel started hunting about 27 years ago with his father who was a very avid outdoorsman. They spent every opportunity possible together at their club in Money, Miss. Joel misses his dad greatly and thinks about him every time out in the field. Joel grew up in a time and area where he would duck hunt every morning before high school. He remembers countless times he and his buddies would come running into the school as the bell rang -- decked out in full hunting attire, still wearing waders with guns in the truck.

After college, Joel moved to Arkansas and has continued his love of the outdoors. According to Joel, "Arkansans should be proud and thankful of the wonderful opportunities that the state provides for public hunting. I have had the luxury of hunting many of the states finest private clubs and honestly feel that our public hunting rivals any of these." Whitt (pictured on left) started hunting with his dad and other family on Mill Bayou around the age of 5. He generally hunts between 40-45 days of the season. He hunts with friends all over Southeast Arkansas but mainly hunts on Mill Bayou with his family and friends.  Hartz enjoys working on projects before the season and seeing the hard work pay off. Whitt also enjoys taking friends, coworkers, and first timers on hunts.

Whitt feels blessed to belong to a family so dedicated to the sport. He also feels blessed to be able to hunt, especially after an ATV accident that could have cost him his life or left him paralyzed. His favorite hunting buddy besides his father is Ross Boling (pictured above right) who was also involved in the accident which happened in late October of 2005. "Still banged up Ross helped me be able to hunt. He did all the grunt work and got me to the blind or hole.  One of my favorite hunting memories was when Ross pulled me over 300 yards across a rice field in a coffin blind to get closer to where the ducks were using that day. I'm surprised he didn't pass out.  I owe it to that man.  We've been on some great hunts over the years where the ducks weren't so lucky."

Whitt graduated from the University of Arkansas in 2011 and is back in Stuttgart working for Riceland Foods as a Regional Sales Manager for Riceland retail products. "Stuttgart and the surrounding area is a special place when it comes to agriculture and waterfowl. The thing that has always intrigued me about ducks is the fact you don't see them year round like deer and other game. The first big cold front in the fall brings ducks and geese from over a thousand miles away back to the same area year after year. That amazes me." 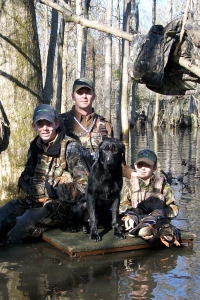 Kody began duck hunting when he was 11 years old. The following year, he went hunting with his Dad's best friend and after limiting out ten people in an hour in the flooded timber, he has been addicted ever since. Kody used to measure success on how many ducks shot in a day. Now that his kids like to hunt, his attitude toward duck hunting has taken on a different approach. Nowadays, Kody simply looks at how many birds they get down into the trees and if they don't kill a limit, then no big deal. Kody hunts around 30 days a year, over half of those with the kids.